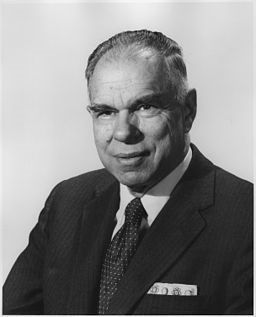 Discovered plutonium and many isotopes

Glenn T. Seaborg is known for his work in the 1930s synthesizing radioactive isotopes many which are useful for nuclear medicine like iodine-131 and cobalt-60.  Dr. Seaborg is best known for discovery in 1941 of the element plutonium (Pu).

The discovery of Pu with its fissionable isotopes added a second element to fissionable uranium-235 for the development of the atomic bomb during the World War II the Manhattan Project. Seaborg directed the plutonium production and chemical separation efforts for the Manhattan project.

In addition to plutonium, Dr. Seaborg and his collaborators at UC-Berkeley synthesized and characterized nine trans-uranium elements before and after WWII.  An additional scientific accomplishment is Seaborg’s insight and formulation of the actinide series of elements that explained the electronic structure of heavy elements based on a similarity to the lanthanides (rare-earth) series on the periodic table.  The 14 elements in each series are an extension added the Periodic Chart of the Elements.  In 1951 he shared the Nobel Prize in Chemistry with Edwin M. McMillan "for their discoveries in the chemistry of the trans-uranium elements."

Glenn T. Seaborg was born and grew up in Ispeming, MI, a small iron ore mining town in the Upper Peninsula.  He moved with his family in 1922 to Los Angeles, CA.  He went to Jordan High School and then to UCLA receiving a BA in Chemistry in 1934.  He then went to University of California at Berkeley and earned a Ph.D. in Chemistry in 1937.  He used the large cyclotron accelerator at Berkeley as the source of protons and deuterons on uranium targets to create the trans-uranic elements.  The product elements were separated chemically and characterized by their chemistry and radioactive decay signatures.

Seaborg used his management skills as chancellor at UC Berkeley in the late 1930s and organizing efforts for the production of plutonium-239 for the Manhattan Project.  After WWII he served on the General Advisory Committee of the US Atomic Energy Commission (AEC) and later (1961 – 71) as Chairman of the AEC.

Seaborg received many honors over his career as scientist, educator, administrator and as advisor to presidents. He viewed his crowning accolade the naming of element 106 in 1974 as “Seaborgium -Sg” by the American Chemical Society.