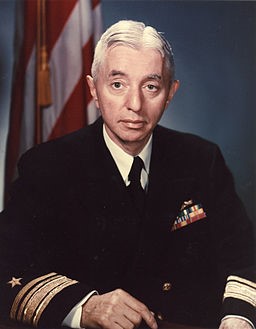 Father of the nuclear navy

Born in Poland, Rickover immigrated to the US in 1905 with his family.  Upon graduation from the US Naval academy, he served in various sea duty capacities before requesting shore duty to pursue his Master’s degree in Electrical Engineering, which he received from Columbia in 1929.  This was followed by three years of submarine duty, during which he was convinced of the need for submarines to play more significant role in naval warfare.

Rickover spent most of WWII at the Navy’s Bureau of Ships in Washington DC, where he worked in design and refinement of shipboard electrical systems.  This eventually led to an assignment in 1946 at the Clinton Laboratory in Oak Ridge Tennessee (now the Oak Ridge National Laboratory) to a team exploring use of nuclear power for ships.  The team recommended construction of a nuclear submarine.  In spite of some initial roadblocks, Rickover was able to convince Chief of Naval Operations Admiral Chester Nimitz to endorse the project to Navy Secretary John L. Sullivan, who approved it.

Rickover achieved success through a non-traditional approach that often saw him circumventing the traditional naval power structure by capitalizing on his personally-developed network of contacts. Though he reached mandatory retirement age in the early 1960s, he was retained on active duty until 1982 as the Director of the Division of Nuclear Reactors.  He had been promoted to four-star admiral in 1973.  Feisty and outspoken throughout his career, Rickover was forced into retirement in 1982 by Navy Secretary John Lehman, as the two had their differences over various issues.

With 63 years of service, Rickover is the longest-serving officer in U.S. Naval history.  It’s interesting to note that he never served in combat, and his only sea-based command was a ship that towed gunnery targets.