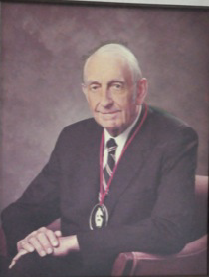 If you like your Hewlett Packard calculator or desktop computer, you can thank the man who started it all. David Packard was born September 7, 1912. He is well known for starting the Hewlett-Packard Company which is responsible for bringing much of the computer hardware and software used today to market. Packard was born in Pueblo, Colorado where he attended Centennial High School. In high school Packard was a well-rounded student showing interest in engineering, sports, and science.  He attended Stanford University where in 1934 he earned his B.A. degree. Upon Graduating, he attended the University of Colorado for a short time before moving to New York to work for General Electric. Packard later returned to Stanford and earned a masters in Electrical engineering. He graduated in 1938 and married Lucile Salter.

In 1939, Packard partnered with William Hewlett started Hewlett-Packard with an initial investment of $538. Hewlett and Packard, working out of Packard’s garage, developed their first product, an audio frequency oscillator, which was later sold to Walt Disney Studios used to produce the soundtrack of the movie Fantasia.

As the United State's involvement in World War II escalated, Hewlett-Packard turned its attention to defense projects producing technological innovations in radar, sonar, and aviation instruments. During the war, Packard led the company as Hewlett entered the U.S. Army. After World War II, business sharply declined and people were laid off. In the late 1960s Packard and Hewlett were positioned to take advantage of the blossoming of Silicon Valley.

In 1969, Packard was appointed U.S. Deputy of Defense by President Richard Nixon, a position he served in until 1971. Afterwards, he returned to manage his company. Before he left the government, however, he established the Defense Systems Management College.

In 1972 Hewlett-Packard started to expand their manufacturing entering the market for handheld scientific calculators. In 1972, Packard decided to retire from direct administration and serve on the board of the company.  The company continued to expand and change in and in 1991 its shifted to manufacturing computers, which for the company, proved to be extremely profitable. Packard was an influence in the growth of the company until his death on March, 26 1996 in Stanford, California.