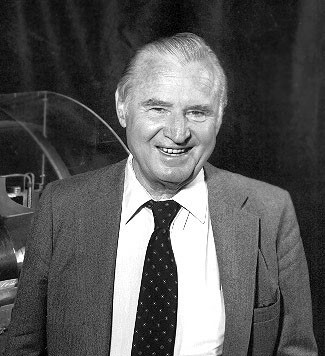 Degree: University of Goettingen, Ph.D. in Physics and Aerodynamics, 1935

Hans von Ohain was born in Dessau, Germany, Ohain graduated with a Ph.D. in Physics and Aerodynamics from the University of Göttingen, then one of the major centers for aeronautical research, having attended lectures by Ludwig Prandtl.  In 1933, while still a student, he conceived what he called "an engine that did not require a propeller."  His first design ran in March 1937, and it was one of his engines that powered the world's first flyable all-jet aircraft.

Ohain started to develop his first turbojet engine designs independently during the same period that Frank Whittle was working on his own similar designs in Britain, and their turbojet designs are said by some to be an example of simultaneous invention.  However, Ohain’s first jet engine, the Heinkel HeS 1, ran successfully in April 1937, the same month that Whittle's first engine, the Power Jets WU First Model, also ran successfully.

Ohain's jet engine was the first to fly operationally within the Heinkel (He 178) aircraft in 1939.  Ohain's used a centrifugal compressor and turbine placed very close together, back-to-back, with the flame cans wrapped around the outside of the assembly.  Operational jet fighter aircraft from both Germany and Britain entered operational use virtually simultaneously in July, 1944.   After the war the two men met and became friends.

During his work at Wright-Patterson, Ohain continued his own personal work on various topics.  In the early 1960s he did a fair amount of work on the design of gas core reactor rockets which would retain the nuclear fuel while allowing the working mass to be used as exhaust.  This interest in mass-flow led Ohain to research magnetohydrodynamics (MHD) for power generation, noting that the hot gases from a coal-fired plant could be used to extract power from their speed when exiting the combustion chamber, remaining hot enough to then power a conventional steam turbine.

He also invented the idea of the "jet wing," in which air from the compressor of a jet engine is bled off to large "augmented" vents in the wings to provide lift for VTOL aircraft.  A small amount of high-pressure air is blown into a venturi, which in turn sucks a much larger volume of air along with it, thus leading to "thrust augmentation".  The concept was used in the Rockwell XFV-12 experimental aircraft.  This is the design philosophy used today in the F-35.  He participated in several other patents.

In 1984–85, Ohain served as the Charles A. Lindbergh Chair in Aerospace History, a competitive senior fellowship at the National Air and Space Museum.  In 1991 Ohain and Whittle were jointly awarded the Charles Stark Draper Prize for their work on turbojet engines.  Ohain was elected a member of the U.S. National Academy of Engineering (NAE).

He retired from Wright-Patterson in 1979 and took up an associate professor position at nearby University of Dayton.  Ohain was awarded the Ludwig-Prandtl-Ring from the Deutsche Gesellschaft für Luft- und Raumfahrt (German Society for Aeronautics and Astronautics) for "outstanding contribution in the field of aerospace engineering” in 1992.  He became a member of the Dayton Engineers club in 1960s.  While a member of the club, he was very active in various activities.