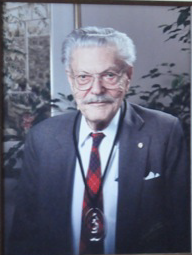 Specific Accomplishment:  Made contributions to acoustics, ballistics and geophysics

Youth Activities:  At the age of 15, he built his own radio receiver.  This was during the infancy of the radio, prior to the first commercial radio broadcast in 1920.

A man of many talents and passions, Paul Klipsch is best known for his development of the folded-horn loudspeaker known as the “Klipschorn.”  First patented in 1945, the Klipschorn can be purchased today and is the only speaker to be continuously produced for over 50 years.  The genius of the folded-horn speaker’s design is its ability to transfer mechanical energy generated by the diaphragm into acoustical energy, increasing the level of sound by factors of 10 or more while simultaneously decreasing distortion.   Klipsch designed the speaker to be placed in the corner of a room for optimal results.  The end result was heralded as the ability to reproduce the sound of a live orchestra in a living room—the beginning of the “hi-fidelity” era in acoustics.

Klipsch developed the first prototype of the Klipschorn in 1938.  He entered the Army in 1941 and in 1942 was assigned to the Southwest Proving Grounds in Hope, Arkansas, where he continued to work on speakers during his spare time.  After mustering out, he established the firm Klipsch and Associates in a tin shack in Hope in 1946 and began hand-producing speakers by himself.  He didn’t hire his first employee until 1948.  Nonetheless, the firm subsequently flourished and continues to operate today under the name Klipsch Audio Technologies.  Klipsch went on to design numerous other speakers until he sold the business to a second cousin in 1989.

Prior to his Army time, Klipsch held various positions, including:

Klipsch is often referred to as an “eccentric,” and his unconventional personality was reflected in many ways:

Klipsch’s work netted him 23 patents, including:

“Milestones, The Journey of a Legend,” Klipsch, retrieved 17 August 2016 from http://www.klipsch.com/milestones