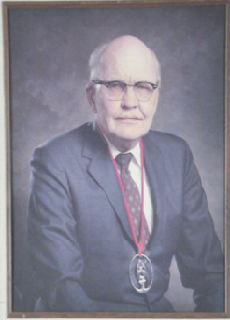 Youth Activities:  Was interested in amateur radio, which fueled his attraction to electronics

Jack Kilby invented the monolithic integrated circuit.  Also known as a “microchip,” the integrated circuit is an extremely compact set of circuits on a small plate of semi-conductor material.  Today’s integrated circuits can include billions of components.   The integrated circuit revolutionized the computer industry, transforming it from one based on room-sized main-frames affordable only by large organizations to today’s widespread use of high-powered personal computers, tablets and pocket-sized smart phones.

As an employee of Texas Instruments (TI) in 1958, Kilby was working on solving the electronics industry’s problem known as the “tyranny of numbers,” or the need to assemble many discrete components (such as transistors, diodes and capacitors) into a complete circuit by hand-soldering their wire connections. This was an expensive, time-consuming process that created a potential vulnerability at each solder point.  It occurred to him that the various components could all be produced from the same material and could be made in place in an interconnected complete circuit.  While most of the veteran employees were away on vacation (new-hire Kilby had not yet earned any vacation), Kilby fashioned the first integrated circuit based on this concept.  He successfully demonstrated his chip—half the size of a paper clip—on 12 September 1958.  Not long afterward, Robert Noyce of Fairchild Semiconductor independently developed an integrated circuit that improved upon various aspects of Kilby’s, ultimately resulting in a cross-licensing agreement between Fairchild and TI.

Eliminating the need for separate components paved the way for progressively smaller computers—a trend complemented by the phenomenon known as Moore’s Law.  First articulated in 1965 by Intel founder Gordon Moore, Moore’s Law holds that the continuously decreasing size of transistors enables the doubling every two years of the number of transistors that can fit on a chip.   It all adds up to increasingly compact, faster-processing computers.

Kilby started his career in 1947 with Globe Union, Inc., doing circuitry work on various consumer products but moved to Texas Instruments in 1958 to work full-time on electronic component miniaturization.  After his microchip breakthrough, he led teams that developed applications for the Air Force, including the Minuteman Missile and the first computer incorporating integrated circuits.  Commercialization of microchip technology came with his co-invention of the “Pocketronic” hand-held calculator that was introduced in 1970.  He also co-invented the thermal printer for use in portable data terminals.

Kilby took a leave of absence from TI in 1970 to do independent research on solar power generated from silicon technology.  He retired from TI in 1983 but continued to consult with the firm.  From 1978 to 1984, he served as Distinguished Professor of Electrical Engineering at Texas A&M University.

In 2000, Kilby was awarded the Nobel Prize in Physics for his work in developing the integrated circuit.  During his career he secured over 60 patents.

“Oral History:  Jack Kilby,” Interview of Jack Kilby conducted by Michael Wolff of the Institute of Electrical and Electronics Engineers on 2 December 1975, retrieved 11 August 2016 from Engineering and Technology History Wiki at http://ethw.org/Oral-History:Jack_Kilby