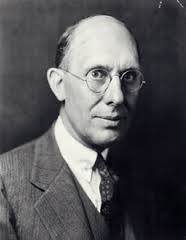 Charles Kettering is not as famous as Edison, the Wright brothers, or Nicola Tesla, but every time you get in your car and take out your key to start it, Kettering is the reason you don’t take out a crank instead. The key operated self-starter is only one of the 182 patents Kettering had in his 82 years of life. Not a bad accomplishment for the practical inventor.

Born on August 29, 1876, Kettering struggled through school; eye sight problems gave him serious headaches which made focusing difficult. Kettering took classes at the college of Wooster and later transferred to The Ohio State University. His eye sight problems forced him to withdraw and take a job working at a phone company, which left him depressed. While there, Kettering found his electrical engineering skills useful which lifted his spirits.

When his vision improved, Kettering graduated with an electrical engineering degree in 1904. Immediately after graduation Kettering moved to Dayton, Ohio, and took a job as the head researcher at the National Cash Register Company (NCR). There he helped develop the first cash register with an electric motor to open the cash drawer.

One of Kettering’s colleagues at NCR, Edward Deeds, suggested they go in to business developing innovations for the rapidly growing new automobile industry. The pair invited other NCR engineers to work with them on their projects. The group met on weekends at Deeds' barn, giving them their nick name the "Barn Gang."   In 1909 Kettering left NCR and incorporated the Barn Gang into the Dayton Engineering Laboratories Company (DELCO).

DELCO’s first task was from Cadillac’s founder Henry Leland, whose friend was killed by a car's dangerous crank starter. Using what he learned from designing the electric cash register, Kettering created a compact electric starter that featured a key instead of a crank. This was perfected by 1912 and was included in all Cadillac’s models afterwards.

In 1916, Kettering and Deeds sold their interests in DELCO to United Motors company, which later became General Motors, and became its research division. In 1920, Kettering became its vice president and stayed there until his retirement in 1947. There he developed hundreds of innovations such as a light weight diesel engine for trains, fuel that eliminated engine knock, and quick-dry car paint. Kettering also had many non-car related inventions such as the Freon cooled refrigerator, incubators for premature infants, and an early missile nicknamed "the Kettering Bug," a paper mache flying bomb with 12-ft wings.