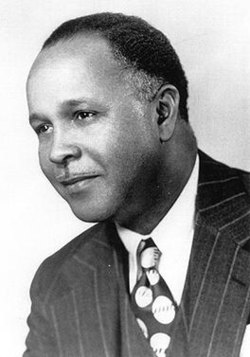 Percy Julian derived the steroid hormone cortisone and numerous other substances from soybeans through synthesis—the process of changing one substance into another through a sequence of controlled of chemical reactions.  Julian came up with his version of cortisone in 1949 by simplifying the existing process of cortisone synthesis, thereby significantly reducing the cost of the drug, which had previously been available only to the wealthy.  Employed originally to treat rheumatoid arthritis, today’s many cortisone applications include treating autoimmune diseases, inflamed joints, and infectious mononucleosis.  It’s also used as an anti-rejection drug for transplant patients.

Soy was also the basis for Julian’s synthesis of the hormone progesterone, which is used to treat uterine cancer and prevent miscarriages.  Additionally, he developed the soybean protein that was the fundamental ingredient of the flame-retardant Aero-Foam employed by the U.S. Navy during WWII.

An African-American, Julian achieved his impressive array of successes while battling racial discrimination throughout his life.  Not permitted to attend public high school in Montgomery, Alabama, he instead went to a teacher training school for blacks.  At college, he could not stay at school dormitories, and his off-campus boarding home refused to feed him.  He was denied a teaching assistantship at Harvard because it was felt white students would not appreciate a black teacher.  He was a candidate for a permanent professorship at his alma mater DePauw University, but was ultimately rejected because of his race.   DuPont considered him for employment, but refused him when they learned he was black.  The house he bought in a largely white suburb of Chicago in 1950 was set on fire and then dynamited. In spite of all this, he persevered and thrived in his chosen profession.

Julian started out in academics, teaching at all-black schools, including Fisk and Howard Universities, as well as the West Virginia Collegiate Institute.  As a research assistant at DePauw in 1935, he earned his first measure of renown when he teamed with Dr. Joseph Pikl to synthesize physostigmine, which is used to treat glaucoma.

In 1936, Julian moved to the Glidden Company as the Soya Product Division’s Director of Research, and it was there where he excelled in his work with soybean synthesis.  His achievements were fueled by his success at producing industrial-grade isolated soy protein, thus providing the basic ingredient for numerous products and further experimentation.

Julian established his own business in 1953—the Julian Laboratories—which provided synthetic steroid intermediates to pharmaceutical companies.  Business was good, and Julian sold the company for $2.3 million in 1961.

Julian’s later years were spent playing an active role in the civil rights movement as a fund raiser and public speaker, and he founded the Julian Research Institute to train future chemists.  He earned over 130 patents during his career.

“Who was Percy Julian?” Nova, retrieved 26 July 2026 from http://www.pbs.org/wgbh/nova/julian/lrk-whowasjulian-exp.html

“The Life and Science of Percy Julian (Teacher Version),” Science Alive, retrieved 27 July 2016 from http://www.chemheritage.org/percy-julian/teachers/narrative.html (As of 1 Aug 2016, this link had been removed from the web site.)