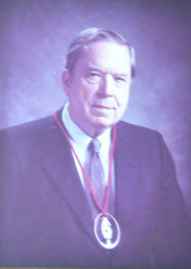 George W. Housner received his bachelor’s degree in civil engineering from the University of Michigan in 1933 and his master’s degree from the California Institute of Technology in 1934.  Afterwards, he spent five years designing bridges, schools, dams, and other projects.  Housner’s interest in earthquake engineering began after the earthquake at Long Beach in 1933.  He returned to Caltech in 1939 to earn his Ph.D.  His thesis was An Investigation of the Effects of Earthquakes on Buildings.

After receiving his Ph.D., he worked for the Army Corps of Engineers, and later became an advisor for the Air Force during World War II.  He spent much of this time in North Africa and Italy where he devised a new tactic for bombers to attack bridges.  He also was involved in the bombing raid on Ploesti, Romania.  This was home to Nazi Germany’s only oil field.  It was surrounded by devices called barrage balloons, balloons tethered by 2,000 foot-long steel cables, intended to send low-flying bombers and aircraft out of control.  Housner’s analysis of the stress waves that would move down the length of the cables showed that when the cables were hit at a certain speed, the waves would cause the cables to snap with very little damage to the aircraft.  He was right.

Later on, while in Italy, he read an intelligence report on a list of standard equipment available to German engineers who were in charge of rebuilding bombed-out bridges.  He noticed their longest available I-beam was 15 meters long.  He told operations planners to target bridges with spans greater than 15 meters.  This would make it much more difficult to repair these bridges, and thus leave them out of service for a longer period of time.  In 1945 he was presented the Distinguished Civilian Service Award by the United States War Department.

After the war ended, he became an assistant professor of applied mechanics at the California Institute of Technology.  He studied various issues such as flow-induced vibrations in pipelines and hydrodynamic pressure on dams during earthquakes.  In the 1950s, Housner helped develop instruments for measuring the effects of buildings being shaken in events such as earthquakes.  These strong-motion accelerographs, when installed on several floors of a tall building, allowed engineers to determine the building’s natural vibrational modes and how those modes damped themselves out.

On March 27, 1964, an earthquake hit Anchorage, Alaska.  He was appointed chair of a National Academy of Sciences engineering committee to evaluate the damage caused by the earthquake.  Their report was the first comprehensive scientific study of a natural disaster.  Over the years, he consulted on various projects, including the San Francisco Bay Area Rapid Transit system, Trans-Arabian pipeline, nuclear facilities, ports, and offshore drilling oil platforms.

In 1988, President Ronald Reagan awarded the National Medal of Science to Housner.  He then chaired a disaster inquiry of the Loma Prieta earthquake of 1989. In 2006 he was named a Caltech Distinguished Alumni, the Institute’s highest honor given to its graduates.