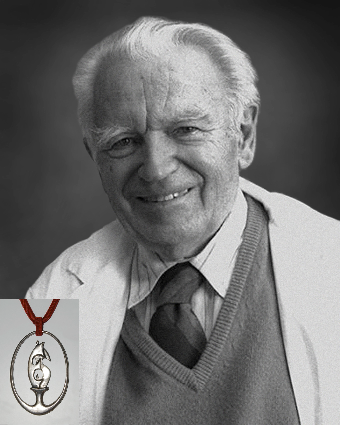 Herzberg's main area of research was centered on atomic and molecular structure using spectroscopy. Herzberg and his associates were able to determine the structure of many diatomic and polyatomic molecules.  He was awarded the Nobel Prize for Chemistry in 1971.

Herzberg was born in Hamburg, Germany on December 25, 1904 to Albin H. Herzberg and Ella Biber.   He received his Bachelor's degree in 1927 and his Ph.D. degree in 1928, from the Darmstadt Institute of Technology. The Nazi persecution of Jews forced Dr. Herzberg to immigrate to Canada in 1935.   For the next decade he was a research professor and teacher at the University of Saskatchewan where he established a spectroscopy laboratory. This was where most advancements in his work on molecular and atomic spectroscopy took place.  His work continued to advance the field and resulted in three books of the six he wrote on the subject.  Herzberg won the Nobel Prize for Chemistry in 1971.