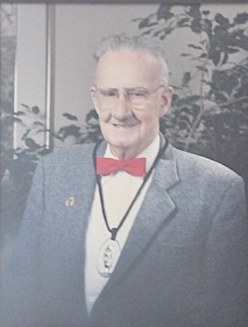 Engineering and Science Achievements:  Wilson Greatbatch is best known for inventing the first effective and implantable pacemaker.  In 1967 Greatbatch developed a 2.8V lithium-iodide cell which is now the standard cell for pacemakers.

Additional Background Information: Greatbatch was born in Buffalo, New York, in 1919,  to Warren and Charlotte Greatbatch, both British immigrants. He attended school at West Seneca.  Greatbatch joined the sea scouts and earned an amateur radio license at the age of 16.  Greatbatch served in the military during the WWII, and after serving he took advantage of the 1944 GI Bill and attended Cornell University where he studied electrical engineering. He graduated in 1950 and started teaching at the University of Buffalo in 1952.

In 1956, due to an error while working on a heart rhythm recorder, Greatbatch discovered a heart rhythm recorder could pulse instead of just recording the rhythms. This was a major moment as Greatbatch had found a way to electrically stimulate the heart. Before this discovery all pacemakers where external, bulky and required a lot of power and lacked reliability. Over the next two years Greatbatch started developing and improving on making a device that would be smaller and therefore implantable. By 1960 the pacemaker had been implanted in the first human patient, a 77-year-old man, who went on to live for about 18 months.

A patent for the implantable pacemaker was granted in 1962 and in 1970 Greatbatch founded Wilson Greatbatch Ltd which is now know as Greatbatch Inc. As the pacemaker’s impact and popularity increases Greatbatch continued to try to improve on his latest designs, working and researching in his garage. He continued his research up until his death in September of 2011.