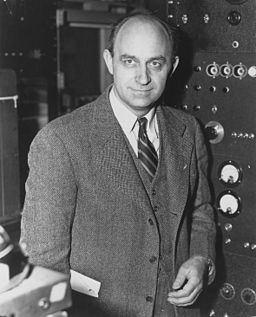 Enrico Fermi was first to use a neutron to induce fission of a nucleus releasing large amounts of energy with each event. He received the Nobel Prize in Physics in 1938 for this and related work on producing elements induced by neutron irradiation.  In 1933 he developed the theory of beta decay to describe neutron decay into a proton, electron and a third particle the neutrino to explain the energy distribution of the electron.  He further developed the process for self-sustained chain reaction of nuclear fission with Chicago Pile-1 that is the basis for operation of all power reactors in use today.

Fermi was born in Rome, Italy September 29, 1901.  He studied physics and was active in the development of quantum mechanics and nuclear physics.  He came to the United States in 1938 to Columbia University and the University of Chicago.  He became an American citizen in 1944.  He worked on the Manhattan Project after his success with Chicago Pile-1.  After WWII, he continued his work on nuclear physics for the Atomic Energy Commission and the beginnings of particle physics.  He had many patents and his name survives with reactors and an accelerator lab near Chicago, Fermilab.  He died in 1954 at age 53.

Induction into the Engineering and Science Hall of Fame (posthumously) for the Atomic Fission Process.