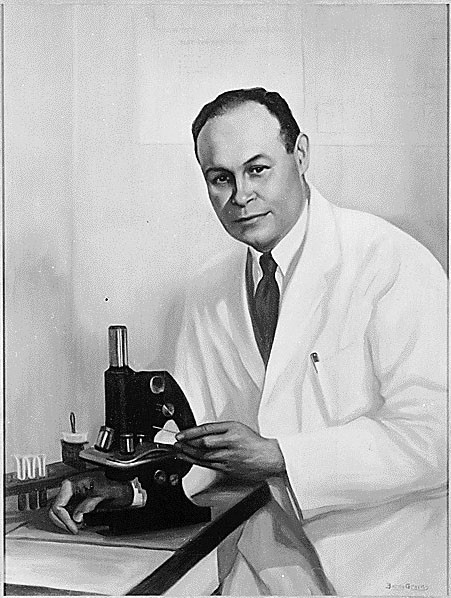 Specific Accomplishment:  Pioneered research into the production and preservation of blood plasma, set up the first blood bank in England by request of the British government, and started what we now know as bloodmobiles--trucks containing refrigerators of stored blood.

Youth Activities: In spite of having to grow up in a racially-segregated Washington. the young Drew was a go-getter.  At the age of twelve, Charlie (as he was called, even as an adult) became a paper boy, selling several Washington papers from a street corner stand; within a year, he had six other boys working for him and was able to cover a wider area. As he got older, his after-school and summer jobs included supervising at several city playgrounds, life-guarding at the local swimming pool, and working construction jobs. Though bright, he was not an outstanding student; instead, he devoted much of his effort to athletics, where he excelled. Ambitious and competitive, in high school he lettered in four sports, and won the James E. Walker Medal for all-round athletic performance in both his junior and senior years. He was voted "best athlete," "most popular student," and "student who has done the most for the school."

Bachelor's Degree:  Entered Amherst College in Massachusetts on an athletic scholarship and graduated in 1926. His achievements on the Amherst track and football teams were legendary; long after he distinguished himself as a blood banking pioneer and medical educator, many still remembered him best as an athlete. As in high school, Drew did not excel scholastically. He did, however, develop an interest in the medical sciences through his biology courses.

Doctor of Medicine and Master of Surgery in 1933 from McGill University in Montreal, Quebec, Canada (ranked 2nd in his class of 127 students). The racial segregation of the pre-Civil Rights era constrained Drew's options for medical training. Some prominent medical schools, such as Harvard, accepted a few non-white students each year, but most African Americans aspiring to medical careers trained at black institutions such as the Howard University College of Medicine in Washington, DC

Doctor of Medical Science in 1940 from Columbia University (the first African American to do so).

African-American surgeon and researcher who helped set up and administer an early prototype program for blood storage and preservation; he then proceeded to organize America's first large-scale blood bank and trained a generation of black physicians at Howard University.

Additional Details: In 1938, the Rockefeller Foundation offered Drew a research fellowship at New York's Columbia Presbyterian Medical Center to study blood.  While there he discovered that a plasma, a pale yellow liquid without the blood cells could be stored, preserved, and used in time of emergency.  In September, 1940, as World War II raged in Europe, Drew was asked to head up a special medical effort known as "Blood for Britain." He organized the collection and processing of blood plasma from several New York hospitals, as well as the shipments of these life-saving materials overseas to treat causalities. According to one report, Drew helped collect roughly 14,500 pints of plasma.

In 1941, Drew spearheaded another blood bank effort, this time for the American Red Cross. He worked on developing a blood bank to be used for U.S. military personnel. But not long into his tenure there, Drew became frustrated with the military's request for segregating the blood donated by African Americans. At first, the military did not want to use blood from African Americans, but they later said it could only be used for African-American soldiers.  Outraged by this racist policy, Drew resigned his post after only a few months.

Drew's innovative work was recognized by awards and honors, including: the 1942 E. S. Jones Award for Research in Medical Science from the John A. Andrew Clinic in Tuskegee, AL; an appointment to the American-Soviet Committee on Science in 1943; the 1944 Spingarn Medal from the NAACP, for his work on blood and plasma; honorary doctorates from Virginia State College (1945) and Amherst College (1947); and election to the International College of Surgeons in 1946.

He has received countless posthumous honors:

In addition schools and health-related facilities, as well as other institutions, have been named in honor of Dr. Drew.