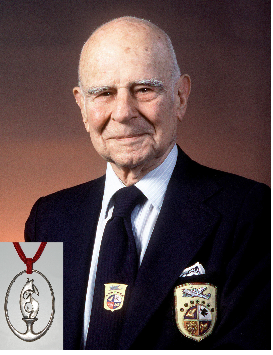 Youth Activities: Doolittle spent much of his childhood in Alaska where he learned to pilot dog sleds and learned to box.  Doolittle was a distinguished boxer and gymnast in high school.

Engineering and Science Achievements: Doolittle’s most important contribution to engineering was the development of instrument flying.  Doolittle’s work enabled pilots to fly from takeoff to landing in clouds, fog, and night conditions.  Doolittle’s doctoral dissertation “Wind Velocity Gradient and Its Effect on Flying Characteristics, "used laboratory data to prove that a pilot could not instinctively determine the direction and velocity of the wind with no ground references.

Additional Background: Doolittle was born in Alameda, California, but he lived in Nome Alaska for most of his youth where his father was a gold prospector and a carpenter.   Doolittle moved back to Alameda, and attended high school in Los Angeles.  Upon graduating from high school he attended Los Angeles City College and then transferred to the University of California Berkeley.  Doolittle left school in October 1917 to enlist as a pilot cadet in the Signal Corp Reserves.  Upon becoming a pilot, he was commissioned as a second lieutenant in the Army on March 11, 1918.

One of the most famous military aviators of World War II, having led the infamous Doolittle raid against Japan In 1942, Lieutenant Colonel Doolittle led a squadron of 16 B-25 bombers on a top secret mission to bomb the mainland of Japan.   After months of training in very short takeoffs, the heavy bomb laden aircraft were launched off the deck of the aircraft carrier USS Hornet toward targets in Japan.  No one could have imagined that a bomber that size, let alone 16 of them, would be able to take off from an aircraft carrier.  Although many of the bombers had to ditch in the ocean, including Doolittle’s, due to low fuel, the mission was deemed a success as it caught the Japanese by surprise and demonstrated U.S. resolve to win the war.  For his heroic actions, Doolittle was award the Medal of Honor by President Franklin D. Roosevelt at the White House.