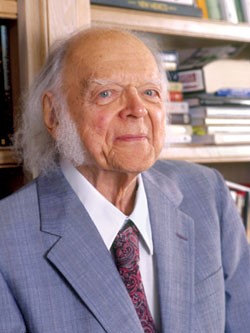 Youth Activities:  Clark enjoyed making his own toys as he grew up during the “Great Depression”.

Clark started out studying medicine and was on track to become a medical doctor, but he came to the conclusion that he would serve humanity better by doing research.  Instead of helping one patient a time, he could help thousands at a time. Clark is known as the father of biosensors.  Clark invented the first glucose electrode biosensor, and the Clark Electrode used to measure the amount of dissolved oxygen in the blood.  The device works by producing a voltage proportional to the flow of electrons through a Teflon membrane to the electrode.   Clark also accomplished pioneering research in the design of heart and lung machines in the 1940s and the 1950s.  Clark is also a pioneer in the development of artificial blood and the inventor of Oxycyte, and perflourocarbon oxygen carrier.  Clark held over 80 different patents as the result of his research and inventions.   In addition to research, Clark taught at Antioch College, the University of Cincinnati and the University of Alabama.

In addition to being inducted into the Engineering and Science Hall of Fame (1991), Clark received numerous awards including the Horace Mann Award for Service to Humanity, Antioch College, (1984) and the National Academy of Engineering Fritz and Delores H. Russ Prize (2005).