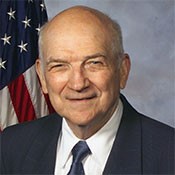 John W. Lincoln is recognized as the world leader in aircraft structural design and integrity, which has led to increased safety in military and commercial aircrafts.  His career began as a pilot of DC-3s for Lincoln Airlines (his father's business) followed by 22 years as a structural engineer and designer at Vought Aerospace.

In 1971, Lincoln brought this experience to the Aeronautical Systems Division (ASD) of the United States Air Force (USAF) at Wright-Patterson Air Force Base and accumulated another 29 years of service to both military and commercial structural integrity processes.  Lincoln worked tirelessly with leaders in the military and commercial aerospace technology arena and developed industry standards for transition of new structural technologies to full-scale development.

In the interest of commercial aviation safety and the advancement of damage tolerance principles, Lincoln worked extensively with the Federal Aviation Administration (FAA) acting as a senior technical advisor.  His aircraft designs and leadership over more than 50 years have led to excellent aircraft structural safety records for the USAF and commercial aircrafts.