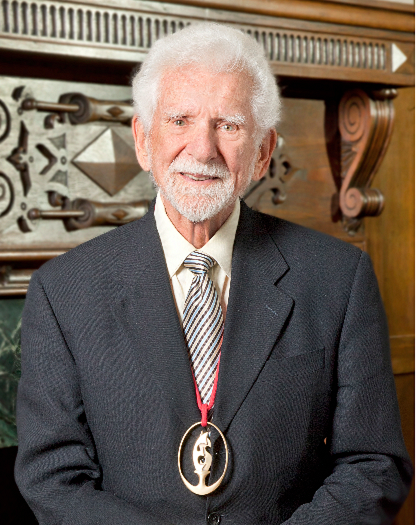 Inventor of the Personal Cellular Phone

In 1950 Martin Cooper, inventor of the cell phone, graduated from the Illinois Institute of Technology (IIT).  After graduation he served in the Navy Reserve as a submarine officer during the Korean War.  In 1957 Cooper earned a master’s degree in electrical engineering from IIT. In 2004, Cooper was awarded an honorary doctorate degree from IIT.

Cooper started his engineering career at the Teletype Corporation and then moved on to Motorola, Inc. as senior development engineer.  One of his major accomplishments was the design of a handheld police radio system for the Chicago police department in 1967.

Cooper became the leader of Motorola’s communications division in the early 1970’s were he conceived the first portable cellular phone in 1973.  The original personal portable phone the DynaTAC8000X, was affectionately known by as “the brick” because it weighed 2.5 pounds and was about the same size as a brick.  The phone’s battery had a weight 4-5 times more than batteries found in modern cell phones and stored enough energy for about 20 minutes of use.  On top of the short battery life, it took ten hours to recharge.

Martin made the first cell phone call on April 3, 1973.  The call was to a rival competitor, Dr. Joel S. Engel at ATT.  During his phone call he told his rival what he had done by telling him he was talking to him on a cell phone.

Cooper worked at Motorola for 29 years where he rose to the position of Vice President and Corporate Director of Research and Development.  Since 1993, Cooper and his wife Arlene Harris have created several businesses to provide cellular phone service, research and development, and software for the cell phone industry.

“Cooper’s Law” states that the maximum number of data transactions that can occur simultaneously on all of the useful radio spectrum doubles every 30 months.