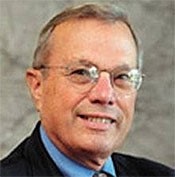 Bradford Parkinson (1935- ) is an engineer, invento,r and colonel in the United States Air Force (USAF). His work was instrumental in the development of today's Global Positioning Satellite (GPS) System.

Parkinson graduated from the United States Naval Academy in 1957 and wanted to study control engineering and inertial guidance. He found that opportunity by joining the U.S. Air Force.  After two years of active duty, Parkinson went to MIT and earned his MS in engineering in 1961. He was assigned to the Central Inertial Guidance Test Facility at Holloman Air Force Base in New Mexico. He then went to Stanford University to earn his Ph.D. in 1966.

In 1969 Parkinson was assigned to combat duty in Vietnam. By 1972, all of his education and experience prepared him to lead the USAF 621B program for satellite navigation (developed jointly with Aerospace Corporation). The 621B program became NAVSTAR and by 1978 Parkinson's team had developed a working GPS prototype.

Parkinson retired from the Air Force after completing the NAVSTAR prototype and began teaching and working in the private sector on navigation related products. In 1984 he became a research professor at Stanford University with further involvement in the private sector. Parkinson remains active as professor emeritus at Stanford. Today, Parkinson and other researchers continue to find new applications for the GPS technology.